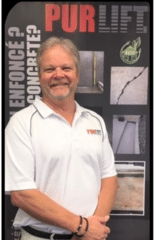 Lee grew up in Montréal where he began his career in sales at the very young age of only 16 years old. He developed a strong passion for sales and working with the public through his lengthy experience in retail stores such as: Foot Locker, Sports aux puces, Andre JAC Sports to name a few. During that time, he also continued to pursue his studies in Business Administration. As the years continued, Lee exceled in sales and became one of the best sales representatives in Québec. He did all this with professionalism, a positive attitude, and being attentive to the needs of others, placing them first and foremost. When Lee believes in a product, he is very dedicated to it. Not only does he enjoy helping others, he is always trying to make a difference! In his spare time, he keeps active as a hockey referee, teaching and playing tennis, being a drummer in a rock band, cooking, and spending time with his family.

Back to Previous Page Back to Meet The Team

We serve the following areas